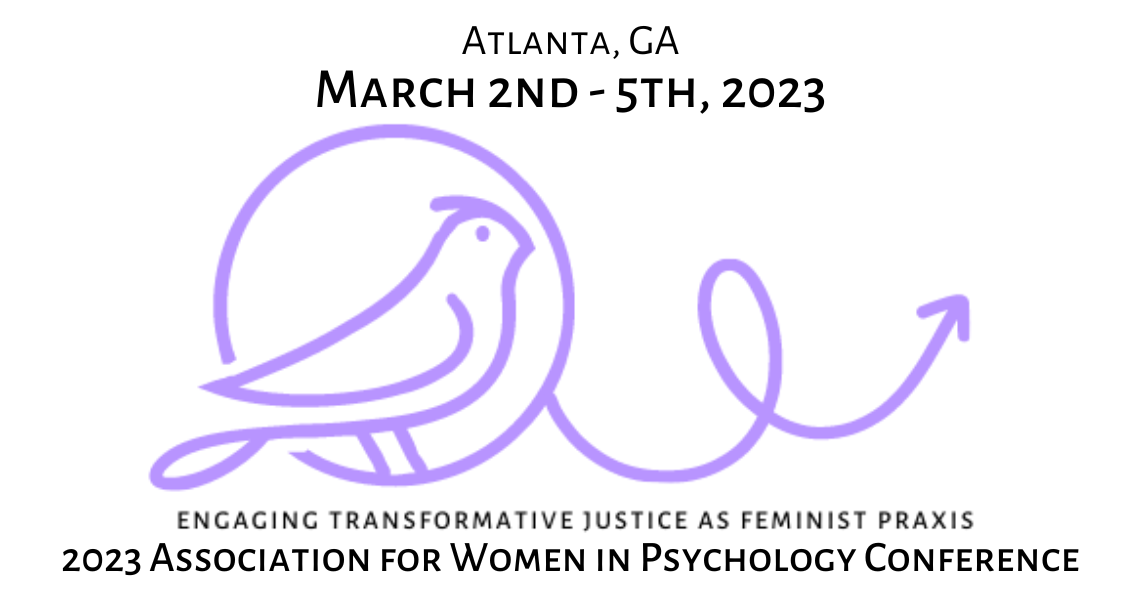 The Caucus for Non-Binary Sexual & Gender Diversity ("Queercus") is committed to promoting dialogue within AWP about the range of expressions of sexual orientation, gender identity and sexual diversity. In particular, the Queercus seeks to raise awareness of aspects of identity that do not fit into traditional dichotomous conceptualizations. The Queercus supports conference programming on sexual and gender diversity, particularly as it intersects with issues of race, class, and ability status as well as spirituality. The caucus also sponsors the annual Coming Out Ceremony, where participants are invited to come out about any aspect of their identity for which they would like community witness and support.

The Women of Color Caucus provides a safe space for women of color within AWP to come together to discuss topics relevant to their experiences. We connect to support each other as we navigate various aspects of our identities, careers and lives as feminist educators, researchers and practitioners. We hope to provide an opportunity for WOC to find a home within AWP, whether this is your first or your 39th conference!" The Caucus is open to all Women of Color.

Social class is more than just how much money you have. It's also the clothes you wear, the music you like, the school you go to -- and has a strong influence on how you interact with others (Keltner, Kraus, & Piff, 2011). It is a more profound part of who we are than we have typically acknowledged. Lott and Bullock (2007) have argued that psychology as a discipline has neglected social class, and this has impaired our knowledge base and our clinical practice. As an association, we might also ask how our lack of understanding of social class impacts our interactions, processes, and policies.

Social class refers to hierarchical distinctions between individuals or groups, characterized by differential access to necessary resources. As a critical element impacting the individuals’ lives, it merits increased attention from mental health professionals. In an effort to bring social class and related topics to the fore in AWP, an interest group on social class was convened during the 2006 and 2007 annual conferences, participants of which decided to form the Social Class Caucus.

Some recent research and publications suggest that both researchers and clinicians are developing a better understanding of the impact of social class on human interactions.   The Social Class Caucus works for social class consciousness among AWP members and within psychology and mental health practice. At AWP 2013 we had an exciting caucus meeting and workshop. Please help us to expand our presence at AWP and within the field.

This caucus is currently inactive. Please contact Clare Mehta, if you would like to get involved with this caucus.

Join the movement for Size Acceptance; Challenge the medicalization of fat. As the medical industry continues its war on obesity, the size acceptance movement is gaining momentum. In the past 5 years, fat activists and scholars have founded a journal, established blogs, published texts to be used in Fat Studies classrooms, challenged invalid statements regarding obesity, and have offered size acceptance workshops to psychologists in training. The Size Acceptance Caucus is part of an academic and grassroots MOVEMENT.

The AWP Size The Size Acceptance Caucus promotes research, clinical services, and activism advocating size acceptance and ending size discrimination. We recognize the principles of the 1973 Fat Liberation Manifesto, including the rights of people of all sizes to human respect and recognition and equal access to employment, education, public facilities, and health services, recognizing the intersection of size discrimination with other facets of human diversity, and the exploitative nature of the weight-loss and beauty industries.

The Size Diversity Caucus meets at the AWP conferences. Join us there to hear the activities and presentations conducted by members in the past year. We want to challenge the myths about obesity and promote the Health at Every Size perspective, especially among psychologists. Our plan last year was to find a way to share activities and materials between meetings. We did not implement this plan, and we are looking for members who can assist us in setting up an effective network using Facebook, a listserv, and dropboxstrategy. Under new leadership, we can become a network that supports size acceptance on our campus and/or in our community. If you cannot attend AWP this year, contact me, the current Chair to join the Caucus.

The Caucus on Mothering Issues was created at the 2005 annual AWP Conference after online discussions of feminist mothering and the ways in which psychology historically and currently has not served mothers well. The issues facing mothers are rarely addressed at professional conferences, within the discipline of psychology, or within the literature. The Caucus provides a space for sharing professional work (research, teaching, practice) and personal experiences. Membership is open to all. We currently are looking for new ideas and activities.

The goals of the Researchers' Caucus are (1) to encourage current AWP members to present their quantitative and qualitative research at AWP conferences; (2) to provide a forum for researchers to network and collaborate on future projects; and (3) to encourage new researchers in the field to join AWP.

The Student Caucus was formed to represent the position and needs of student members of the Association of Women in Psychology. In addition to other aspects of their identities, students face unique challenges in professional domains. The power dynamics experienced by students in conferences and other professional spaces are often overlooked. This caucus gives students a space to engage with other peers about their struggles and achievements within the discipline of psychology. Participants are also able to build a network of peers with whom to collaborate and communicate both within and outside conference spaces.

This caucus is currently inactive. Please contact Rachel Dyer, if you would like to get involved with this caucus.

Early career professionals (clinicians, postdocs, junior faculty, researchers, others) may have fewer sources of mentorship than graduate students and fewer informal support networks than those who are more established. The Early Career Caucus (ECC) serves feminist early career professionals by promoting their needs within AWP. The ECC provides opportunities for early career professionals to network with one another, share educational resources, and gain access to peer and senior mentoring. The ECC will also strive to encourage junior colleagues to become more involved in AWP.

This caucus is currently inactive. Please contact Rachel Dyer, if you would like to get involved with this caucus.

The caucus was formed in 1990 to address concerns about anti-semitism in AWP. In 1992, AWP sponsored a conference entitled "Judaism, Feminism, and Psychology" which attracted about 400 women to our conference in Seattle. The caucus has been a place for Jewish women in express their feelings, discuss issues specific to Jewish women, and create programming for AWP.

We try to have a meeting at the AWP annual conference and have our annual Feminist Shabbat Celebration as well. The Jewish Women's Caucus Award for Scholarship remains in place, coordinated by a Lil Klempfner with a dedicated group of volunteer readers/evaluators. Our group encourages women to submit presentations for the conference and provides mentors to assist.

The Activism Caucus was founded during the 2019 conference in Newport, RI during a session organized by Paula Caplan and Joan Chrisler to discuss the apparent decline in organized activism in AWP and the loss of the Spokesperson position (i.e., the IMP who took public activist stands on behalf of the membership). Like other AWP caucuses, we see our role as raising the organization’s consciousness, sponsoring conference sessions, encouraging scholarly work, undertaking activist projects, and otherwise seeking to make
both societal and organizational change in the service of social justice.

Our primary public mission is to bring psychological research and clinical experiences to bear on attempts to understand social issues and to encourage AWP members and the general public to work for the betterment of society. Because AWP is a 501©3 organization, we cannot engage in partisan politics (e.g., endorse candidates for public office). However, we can lobby, give expert testimony, and take public stands on topics related to our expertise in psychology and women’s/gender issues. The Caucus welcomes new members.

The Teachers’ Caucus was formed to represent the position and needs of members of the Association of Women in Psychology who teach. The goal of the Teachers’ Caucus is to provide a forum for teachers to learn from one another, network, and collaborate on issues related to teaching. Like other AWP caucuses, we see our role as sponsoring conference sessions and encouraging scholarly work.

The AWP Older Women's Caucus (OWC) was formed originally in 1992 (chairs: Doris Howard, Mona Reeva, Royda Crose, Judith Sugar) but was inactive after 2000 until reconvening in 2015. This revival occurred as the result of a 2014 Boston U. conference called "A Revolutionary Moment" that was all about the 1960s and Second Wave feminism. AWP began in 1969 and we had a lot to say. Suzanna Rose, Joan Chrisler, Maureen McHugh, Leonore Tiefer, and Irene Frieze presented a well-attended session about AWP and after reporting on this at AWP in 2015, we decided to revive the OWC to continue the dialog. We have an annual AWP pre-conference workshop in which we discuss feminist psychology and aging, issues of retirement and adapting to life changes, and how AWP can include more intergenerational topics. We also plan sessions for future AWP conferences and take commemorative photos. Each year attendance grows. The OWC is open to all interested AWPers, regardless of chronological age.

The History and Archives Caucus was convened following the first AWP virtual conference, held during the coronavirus pandemic in March, 2021. The potential value of such a Caucus had become apparent during AWP’s 50th anniversary in 2019 (cf. new online historical maps, charts, and timelines made for the anniversary https://www.awpsych.org/awp_herstory.php). As the founders’ generation retires, our archived and online documentation will become the primary source of information about our history.  The role of our caucus will be as liaison with the Cummings Center in Akron https://www.uakron.edu/chp/archives/ (where AWP’s archives reside), to sponsor conference sessions on AWP and feminist psychology history, to encourage members to embrace historical awareness as part of AWP membership, and to maintain and flesh out our historical record through updates and expansions to our website, online exhibits, and material archives. If you have materials that you think may be relevant, please contact AWP's archivist, Mala Matacin at matacin@hartford.edu.

The Campus Sexual Assault Caucus was formed to promotes research, clinical services, and activism related to campus sexual assault.  Our goal is to provide a forum for clinicians, activists, researchers, and teachers to organize activism, learn from one another, network, and collaborate on issues related to campus sexual assault. Like other AWP caucuses, we see our role as sponsoring conference sessions and encouraging scholarly work and activism on this issue.

© 2023 The Association for Women in Psychology. All Rights Reserved.
Website powered MemberLeap.